Photos of Street Dogs Playing Together With A Plastic Dish 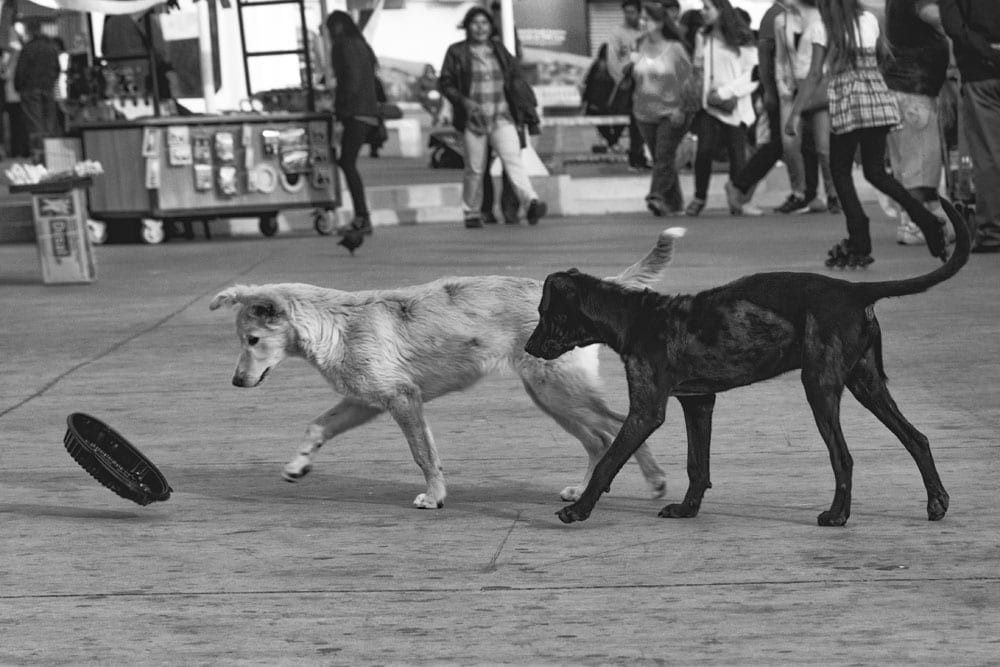 We had a chance to visit Valparaíso, Chile. For those unfamiliar Valparaíso, it’s an exceptionally vibrant port side city in Central Chile, roughly an hour and half drive from Santiago. If you’re into street art, Valparaíso is an absolutely must see destination, as much, if not most of Valparaíso is covered in colorful murals and stunning graffiti. Between their plethora of murals, many art galleries and museums, Valparaíso can be an amazing destination for any art fan to visit. And, like much of the rest of Chile, Valparaíso is well known for their large population of street dogs.

Dog photos being kind of our thing (we are professional dog photographers, after all) we were pretty excited to bust out our cameras and start capturing these beautiful animals. 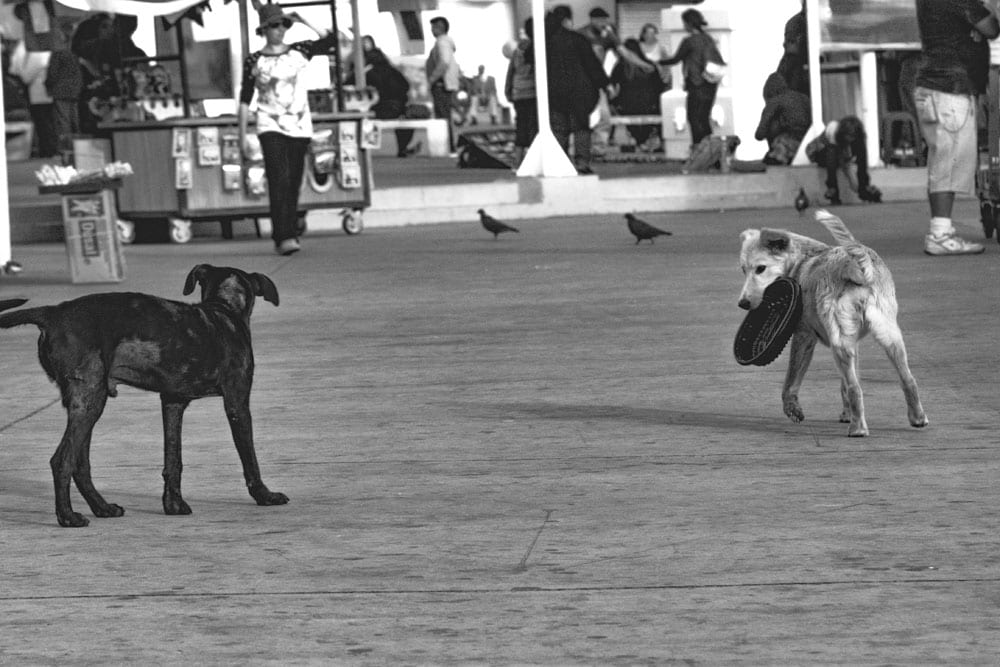 I wasn’t planning on shooting while visiting Valparaíso as my wife and I were on our Honeymoon. And, while my wife is very supportive of my creative endeavors, especially my work as a dog photographer, it was one of those days on our trip I wanted to dedicate my focus on spending time with her and not my work. Well, that was until we stumbled on these two at play and that entire notion went right out the window. It was our first day in Valparaíso. We had just arrived in the city that afternoon by way of Santiago (another amazing city filled with so many friendly dogs). As we tend to do when in a new city, especially one where we are not super familiar with the local language – or in this case dialect (Chilean’s I’m told are widely regarded as difficult to understand, even for many native Spanish speakers from other countries), we had hired a local guide for our initial introduction with the city. She had taken us through much of the city on a walking tour, helping us find our bearings in relatively short time. It was a lot of walking, much of which was spent climbing and descending hills. Turns out, Valparaíso is built into a steep mountainside. Featuring many inclines that put even the extreme street angles of San Fransisco to shame. Needless to say, by the end our tour we were all quite tired and our tour guide, in what I can only describe as an act of pity, brought us down to the waterfront so that we might recharge on flat land. Hit a few vendors, snag a snack or two, and refuel. To a dog, pretty much anything can be a toy

While at the docks I saw two strays – one black and the other golden – playing keep away with a large plastic takeout dish. The kind you might expect to bring home when your purchase a rotisserie chicken at a super market. The two dogs were textbook definitions of mangy, flea ridden mutts. More importantly, they were completely oblivious of the throngs of tourists passing by. And, while they appeared to be stray dogs, they were still dogs. Playing a game that was a mixture of tug and keep away, just like you would expect to see dogs playing in dog friendly households across the United States. While these dogs weren’t in the healthiest of states. At least physically, if the patchiness of their coats were any indication. Mentally, they all seemed fine and were getting plenty of exercise! In the few moments I shared with these dogs, it was obvious they were genuinely happy, wealth socialized and friendly. There’s a chance that they were an anomaly. But In my experiences with the hundreds of other free range pups I met along our travels in Chile, that seemed to be the case every where I went. We connected with many dogs and shared so many amazing experiences with them. It really makes me wonder if there isn’t something we can’t learn from them, particularly in regards to how we live with our own dogs. Skin diseases, patchy fur and lack of neutering aside – would our dogs be happier living outside the confines of our homes and yards? Are regular walks enough? Or are we doing our dog’s an injustice by not allowing them to be active members of our society, free to travel beyond the constraints of leashes or fences? Are leash laws actually helping to protect us and our dogs? Or would we see less dog attacks if our dogs were lent better opportunities to socialize? Are leash laws actually helping to protect us and our dogs?

And to those questions, I genuinely don’t have an answer.  Though that is a fun or at least an interesting query to ponder. We hope you’ve enjoyed this fun series of black and white dog pictures!

J.B. Shepard, Dog Photographer and Founder of the Puptrait Studio.