Pass the Sniff Test: How to Connect with Almost Any Dog 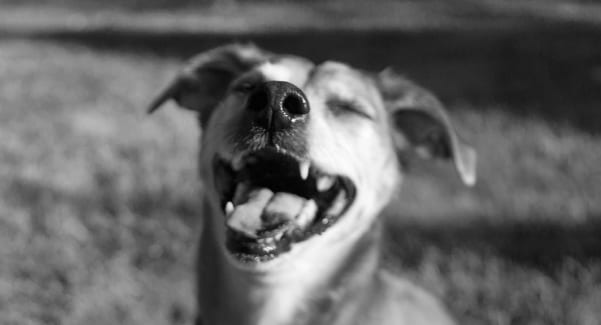 As a professional dog photographer I work with new dogs practically every day. Which in its self isn’t unusual. There are many professions that are expected to do that – groomers, trainers and veterinarians, just to name a few. But as a pet photographer, we have to handle dogs at a level beyond the basics of safety and command compliance. For the simple fact, that in our line of work body language counts.

No one wants to see an angry, scared, or upset expression on a dog. It doesn’t matter how great the lighting or how sharp the focus, if that dog doesn’t look happy and calm – we’ve failed as pet photographers.

Needless to say, it’s important that we build trust with our canine subjects quickly and get them to like us, regardless (or more often than not, despite) of how stressful our environment or shoot location might be.

To accomplish this I rely heavily on a technique that I refer to as “passing the sniff test”.

DISCLAIMER: Use This Technique With Caution!

What I am about to share is an advanced dog handling technique. It is not for beginners and is to be used only at your own risk. Do NOT use this technique unless you are already a) a competent animal handler, b) familiar with the animal and its behavioral history, and c) have already built a basic repertoire with your subject.

WHAT EXACTLY IS “THE SNIFF TEST”?

You may already be familiar with this technique, though possibly under a different name or in slightly differing circumstances.

If your childhood was anything like mine, chances are you would visit your Grandma and the first thing she’d ask you was “Did you eat yet?”. The question, of course, was always rhetorical, it didn’t matter how we responded or when we had eaten last. She always served us something. Because at the end of the day, it was never really about the food or how hungry we were. She just wanted us to know that we were cared for and loved.

GRANDMA KNEW WHAT SHE WAS DOING

You may not realize this, but your grandmother is in good company. As it turns out dogs do the same thing when they meet other dogs. They just lack the means to communicate the question via words. Instead, they sniff each other’s snouts.

And when you do it back to them, more often than not they understand what you mean.

When you sniff a dog’s snout, especially if you do so audibly and using their own sniffing technique (more on that in a second), as if you’re going out of your way so that they know that you’re trying to sniff them, you’re essentially playing the role of Grandma, asking them “Did you eat yet?”.

Of course – and as Grandma has known for years – following a sniff up with a treat doesn’t hurt.

It sounds silly and feels just about as ridiculous to do, but it really works. I can’t tell you how many times I’ve met a nervous or skittish dog who I’ve sniffed – just a quick, but audible ‘sniff sniff sniff’ – who instantly started licking my face and pressing into me for comfort, essentially transitioning me from part of the scary new thing into protecting them from the scary new thing.

ALWAYS BE CAREFUL AROUND STRANGE ANIMALS

Please keep in mind this is an advanced handling technique. Do not attempt the sniff test unless you are already competent at reading dog body language. There’s always a chance, even with a familiar dog, that they may bite you and the face is never somewhere you want to be bitten, regardless of the size of the dog. Always allow a dog to come to you, never force a sniff or invade their space. Remember to remain a safe distance away and allow the dog to approach you half way. If they’re comfortable, they’ll approach. But if they recoil, give them their space.

SOME SNIFFS ARE BETTER THAN OTHERS

Now back to what I briefly touched on earlier about using the right technique.

Not all sniffs are as effective as others and if you’re going to communicate with a dog on their level, it’s important to consider the nuances of their body language. Many folks don’t realize this, but those slits along the side of a dog’s nostrils aren’t just for show. They serve a very specific purpose, one that modifies how they sniff and also explains why they tend to stick their face right into whatever they’re smelling.

When dogs sniff, they exhale before inhaling

Unlike you and I, a dog’s nose doesn’t just breathe in scents. It also blows air out, pre-sniff, often forcibly and loudly, to dislodge particles from whatever it is that they’re smelling. They also tend to hold on to scents, trapping these freshly captured scent particles and storing them temporarily in a chamber inside of their snout.

So, knowing this information try to adapt your own sniffs accordingly to more closely mimic this dog specific behavior, by using shorter, shallower, but more forceful nasal breathes – pushing air out and rapidly back into your nose.

Mimicry and matching body language is effective — to a degree

Remember most dogs are operating around the mental equivalent of a two-year-old human child. There is a very good chance they’ll likely assume your nose functions similar to their own. And, by really digging into each sniff you have a better chance of coming off as authentically caring and not simply fumbling through the motions. 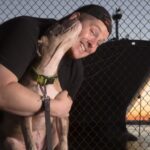